Kufr is not atheism what is a sort of perception where etic and moral can work. As to those who reject Faith, it is the same to them whether thou warn them or do not warn them; they will not believe. (Quran 2:6)

Allah disdains not to use the similitude of things, lowest as well as highest. Those who believe know that it is truth from their Lord; but those who reject Faith say: "What means Allah by this similitude?" By it He causes many to stray, and many He leads into the right path; but He causes not to stray, except those who forsake (the path),- (Quran 2:26)

Allah confirms His method to explain and make comprehensible His Guidance. This method is: giving examples and symbols. We can easily go astray if we follow Quranic instructions word by word without being immersed in the meaning behind the parables and examples.

How can ye reject the faith in Allah.- seeing that ye were without life, and He gave you life; then will He cause you to die, and will again bring you to life; and again to Him will ye return. (Quran 2:28)

Only after the emergence of modern sciences have become clear what this aya means. In the time of Prophet, it was impossible to understand it at the same level as today. It is a wonderful description how we creatures are brought to life from lifeless materials. The chemical composition of our bodies is the same as the soil of the earth. An illiterate Prophet and His companions could have no knowledge about that! From this lifeless status He gives us life than He takes our souls away. Passing away from the Earthly life happens at the same time as our arrival to the Hereafter. In the Hereafter another life is waiting for us where we return to Him.

Those who reject Faith,- neither their possessions nor their (numerous) progeny will avail them aught against Allah. They will be companions of the Fire,- dwelling therein (forever). (Quran 3:116)

O ye who believe! stand out firmly for justice, as witnesses to Allah, even as against yourselves, or your parents, or your kin, and whether it be (against) rich or poor: for Allah can best protect both. Follow not the lusts (of your hearts), lest ye swerve, and if ye distort (justice) or decline to do justice, verily Allah is well- acquainted with all that ye do. (Quran 4:135)

Islamic justice is something higher than the formal justice of Roman Law or any other human law. It is even more penetrative than the subtler justice in the speculations of the Greek philosophers. It searches out the innermost motives, because we are to act as in the presence of Allah, to whom all things, acts, and motives are known. Some people may be inclined to favor the rich, because they expect something from them.
Some people may be inclined to favor the poor because they are generally helpless. Partiality in either case is wrong. Be just, without fear of favor. Both the rich and the poor are under Allah's protection as far as their legitimate interests are concerned, but they cannot expect to be favored at the expense of others.

This is the clear Statement of the Monotheism. No matter which Book or Prophet, or Angel if one has true belief in them and in Allah and in the Day of Judgement, he has to be considered believers.

They are in truth (equally) unbelievers; and we have prepared for unbelievers a humiliating punishment. (Quran 4:151)

They do blaspheme who say: Allah is one of three in a Trinity: for there is no god except One Allah. If they desist not from their word (of blasphemy), verily a grievous penalty will befall the blasphemers among them. (Quran 5:73)

Curses were pronounced on those among the Children of Israel who rejected Faith, by the tongue of David and of Jesus the son of Mary: because they disobeyed and persisted in excesses. (Quran 5:78)

The Psalms of David have several passages of imprecations against the wicked. Psalms 109:17-18; 78:21-22, "Therefore the Lord heard this and was wroth; so a fire was kindled against Jacob, and anger also came up against Israel; because they believed not in God, and trusted not in His salvation"; Psalms 69:22-28, and Psalms 5:10. Matt. 23:33, "Ye serpents, ye generation of vipers, how can ye escape the damnation of Hell? Also Matt. 12:34. 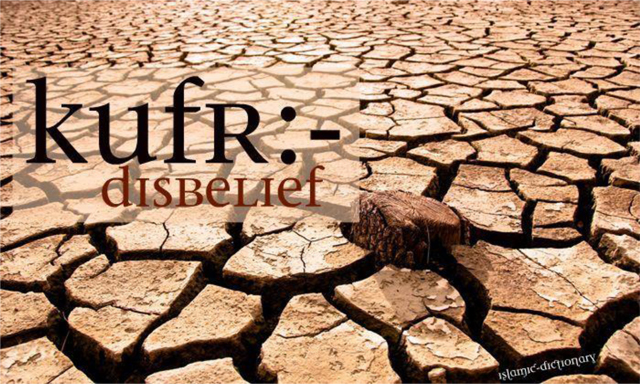