Some draw attention to themselves by asking even if it makes sense and even if it doesn’t. Any interest is welcome, as it is worth opening the gates of knowledge, but asking has an etiquette. It is not possible to ask something what cannot be answered. For example, why do people walk around the Kaaba from right to left and why not from left to right? The answer: because that’s it. Ever since the Prophet (peace be upon him) performed the Tawaf this way, it has been carried out so. Why do we fast in the month of Ramadan and not in another month? The answer: because that’s it. What was the name of the Prophet's favorite cat?
These are unnecessary, irrelevant issues. Whether there is an answer to them or not, the replies will not serve our development. So, right the first point of the etiquette is not to ask a meaningless and irrelevant question.
There are good and malicious questions. Many times, the goal is to discredit, confuse the lecturer. Behind the meaningless and irrelevant questions, we need to clarify the intention.
Questions can be partly asked about prescriptions and regulations. I write partly because there is only a limited response can be given at human level. Such as prayer, rejection of Haram things, and etc. There are answers for many issues however there are others where is no adequate answer. The commandments of Allah cannot be justified by human logic. Just as a kid doesn't know that the fish is full of sharp bones, it is not advisable to swallow them immediately or to drink from every bottle at home, as one may have a corrosive cleaning agent inside. This is how we live in this world as adults. We need the Guidance of Allah, but we need to grow up to understand more. I've got several questions about the ban of pork, the reason of it. An answer was born at every age. There were times when reference was made to the parasites in pork, or to the internal composition of meat, but there are also references to the Old Testament. According to them, the children of Israel broke the Sabbath and the Lord turned them into apes and pigs (5:60, 2:65). The ban has been in force since then. There will certainly be more answers even after 100 or 300 years. The exact answer is only with Allah. This is not to say that research on these issues is not needed to be addressed! It is necessary to deal with the research and to have answers with an expanding content of the given age, however the process may never run out. There will always be new contents to come, which confirm the expediency of the commandments. That is also part of the miracle.
The inquiring persons should only ask questions according to their capacity. Many of us imagine ourselves to be more than we are. Sometimes even though we get an answer, we don’t know where to put it. During the question-answer process, not only the responder but also the inquirer makes an exam.
Many items of the Quran can be explained, for many we do not yet know the adequate answer. Here, both the questioner and the responder need to know their limits. If the responder does not judge correctly the capacity of the inquirers, scales his/her answers on too high or too low level, it will increase the group of unbelievers, not the believers. So, the questions are important, both child and adult can develop through them, but the etiquette of the questioning must be followed. The answer qualifies the respondent’s knowledge and intelligence. The content gives an idea of his/her knowledge, the way it is conveyed of his/her intelligence. However, the question gives a picture on the inquirer’s individuality. His/her character, preparedness and good-manners are revealed. Questions can be asked insidiously, with bad intentions, diverting attention, but it can be also carried out constructively, with good intentions, for the benefit of everyone. Asking questions has an etiquette and it is taught by Islam.

Many secrets are wisely hidden from us. If the future were known to us, we need not necessarily be happy. In many cases we should be miserable. If the inner meaning of some of the things we see before our eyes were disclosed to us, it might cause a lot of mischief. Allah's Message, in so far as it is necessary for shaping our conduct, is plain and open to us. But there are many things too deep for us to understand, either individually or collectively. It would be foolish to pry into them, as some people tried to do in the time of the Prophet. Where a matter is mentioned in the Quran, we can reverently ask for its meaning. But we should never pass the bounds of - our own capacity to understand, - the time and occasion when we ask questions, and - the part of the Universal Plan which it is Allah's purpose to reveal to us.
In order to explain the Quran, we need mass of experts and scientists and even than we shall not reach to the end of its understanding. The Quran is full of miracles were not discovered in the time of our Prophet but today some of them are discovered, like the biology of the embryo or the fate of the Earth Globe, etc. It is impossible that an illiterate person like Mohammed brings a text like that by himself. It is the miracle of Quran what no other Book is able to prove. However, the Quran is not discovered yet as a whole. There are still matters what mass of experts are not able to explain and the answer will come after centuries. Our Quran tells about them but the decoding of the secrets will come later.

On the authority of Abu Hurayrah (may Allah be pleased with him) who said: I heard the Messenger of Allah (peace be upon him) say: “What I have forbidden for you, avoid. What I have ordered you [to do], do as much of it as you can. For verily, it was only their excessive questioning and disagreeing with their Prophets that destroyed [the nations] who were before you.” Al-Bukhari & Muslim 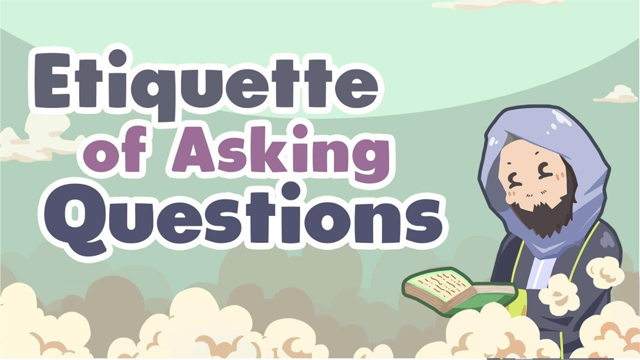